The Laser Cutter is the fire-based equivalent of the Ion Cannon in Strike Force Heroes 3. Fast firing, limited range, high capacity weapons that have the ability to inflict status effect on its target. However, they vary in some areas.

To start with, the Laser Cutter does significantly less damage, and in a less precise manner as well. Conversely, it has an edge in pure blasting rate and a larger capacity to do that with.

Unsurprisingly, the custom version guarantees the burning of an enemy it contacts with, rather than just a chance of it. 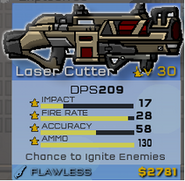