"Globex...I don't like the sound of that. It sounds.....Global."
―Bull, Strike Force Heroes

"You don't get it do you? GlobeX isn't just out for us. They're global!"
―Dex, Strike Force Heroes 2

Globex (or GlobeX) is a private military company/terrorist organization that is the main antagonist in the campaign of all three Strike Force Heroes games.

Not much is known about the background of this group, but they have powerful and widespread influence. This is proven by the fact that they have their own military force and the possession of nuclear warheads. Their name also has the word "Globe" in it, indicating that their influence is "Global" as Bull puts it. As a hired mercenary group/terrorist organzation, they dress uniformly and in black.

Later in Strike Force Heroes 2, they are revealed to be clones of actual soldiers, such as Beta squad. In SFH3 the scientist has taken control as the Globex leader is presumed dead (however, he is revealed to be alive in the last cutscene).

In all games except SFH3, the Globex Leader is the commander of the organization.

In the original Strike Force Heroes, Globex was the primary antagonistic group. They were responsible for the virus that caused people to turn into (essentially) zombies. However, they do have some surprisingly non-evil qualities; their actions are a (misguided) attempt to contain the virus; namely by nuking the island to stop it from spreading. However, they do not listen to any other alternate means, and directly oppose Alpha Squad as a result. In this game, Globex soldiers are seen speaking numerous times. It would appear their Tanks are the commanders, as they are usually seen giving orders. They also seem to hire mercenaries (as seen in the cutscene after The Cure as the protagonist interrogates a soldier). In the end, however, they are stopped, after a gun battle atop a nuke against the Globex Leader.

In this game, Globex (Now spelled "GlobeX") are again the antagonists. In this game, it is revealed that they are clones (Though this somewhat contradicts the previous game), and are completely silent as well. After taking over the mysterious space satellite, they proceed to attack the second squadron, and serve as the main enemies for the entire campaign as the squad attempts to put a stop to the clones. In the end, most of the squadron is either dead (West, Dex) or captured (Nathan, Jyn and Tower), leaving it all up to the Rookie to stop them. After encountering a large mech inside of the clone factory, the rookie manages to get a hold of power armor and engages the Globex Leader once again, who survived thanks to cloning. Even after being forced to fight three clones at once as the mech's defenses attacks the rookie, he manages to kill the Leader once more. It is then revealed the Scientist was a traitor, and he takes over GlobeX afterwards.

In this game, GlobeX itself actually appears very sparsely; they are only seen in the first and last cutscenes in the game (In-game, battles are merely against random individuals with very little story involved). The Scientist uses clones of the heroes, along with a massive clone army, to invade and cause destruction everywhere. However, eventually, the army is defeated, and after a battle against two powerful clones, the Scientist gets enraged, kills his league of officers, and prepares to infiltrate the Heroes directly. Afterwards, Wesley received a transmission from what looks like GlobeX Leader who claims to know information about GlobeX that was leaded by The Scientist.

These are the missions they participated in the first game's campaign:

In the second game, GlobeX appears in every single level outside of the second level.

Although the clone army is apparently that of GlobeX, they do not make a major appearance in the missions themselves.

Globex Leader, after the mission "Intelligence".

The Globex casualty (where the Scientist retrieves the M4 from) in the mission Under Siege. 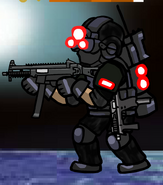 GlobeX Engineer, with a unique version of the Night Vision helmet. 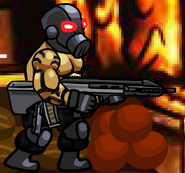 GlobeX Mercenary, with a unique helmet and body (It's impossible to have the "arm tattoos" of the Keepin' Classy, while being shirtless). 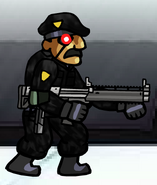 GlobeX General, with a unique eyepatch and armor. 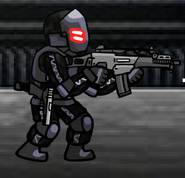 GlobeX Sniper, with a unique helmet. 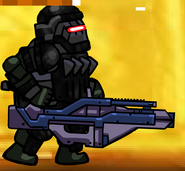 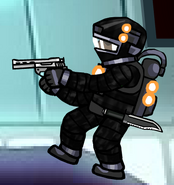 GlobeX Astronaut; notice he only wields two secondary weapons (The Automag and the First Blood) 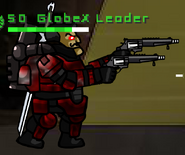 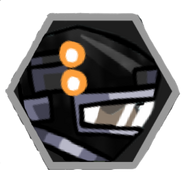 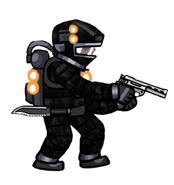