A note for those who have played Raze 2:

This is a list of said glitches in the game.

Switching Assault Rifles with SMGs seems to change the clip of weapons. It also affects various weapons other than assault rifles, for example, the Striker and the Skorpion are affected by this glitch. It seems to only affect weapons that have the same types of clips as SMG's.This does not affect the weapons in any way.

The AKS 74 has the clip of the Dragon.

The Dragon with the AKS 74 clip.

It is unknown how this glitch occurs, but what is known is that as everything begins to lag, and certain elements disappear from the map, as well as the audio playing non stop the sound of the explosive weapon that is being affected by the glitch, everything in its path will be annihilated and explosions will appear all over the map.

Stuck in One Direction Glitch

Occasionally, when running around in the game, the player will get stuck in one direction, making them unable to properly move and play. The player still can jump and shoot. A way to fix this is by pressing all four controls at once. (up, down, left and right; or W, A, S and D.) If you die, it goes away as if it never happened. It can also be corrected if you press the key in which the player is going.(e.g.- If it is going to the right side then press "D") This also can occur in the other games, often by the player right-clicking while moving in a certain direction (This can still be fixed by clicking into the game screen and/or pressing the key of the direction the player is moving. )

Standing in a Vent

If you play the level "Foundry" and go to the far left-top corner of the map where the vent is, all you need to do is duck under there, go near the drop, fall and then quickly get back up. You will still be able to move and function fully. 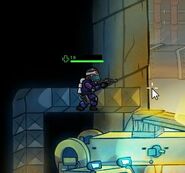 Playing SFH on most sites other than Armor Games will result in this:(Note: This is the first level, "Under Siege")

Like the Messed-up camera, playing SFH in other pages will result in a unsaved secondary weapon. After you exited and reload again, the secondary weapon changes to the USP. However, your War Funds retains the cost of the weapon, like nothing happened.

In the same case as previous glitches, the character's skin is not defined correctly, resulting in a mix-up of various skins, including zombie skin or special character skin. Also, the weapons often disappear.

In the Foundry map, if you go up to the corner with the vent in it, kneel down, and point your cursor to the exact middle of the crane arm you are standing on top of, the entire game screen starts violently shaking up and down. Move your mouse/cursor away, and the shaking will stop.

If you are a commando, and you were the Juggernaut when you died, and somebody is killed by a Bouncing Betty that you placed, you will come back as the Juggernaut, but you will be your own suit/skin color. There is no way to reverse this, except by death.

If you have some sort of explosive weapon (and not an explosive itself; i.e. Bouncing Betty) you can actually kill your own teammates. This can also occur in Strike Force Heroes 2 when using elemental or plain explosive weaponry)