Other than skins, there was a cut zombie survival mode, known as Outbreak, for quickmatch that can be found in the game's code. But it is stated that it will most likely return for the remastered versions. 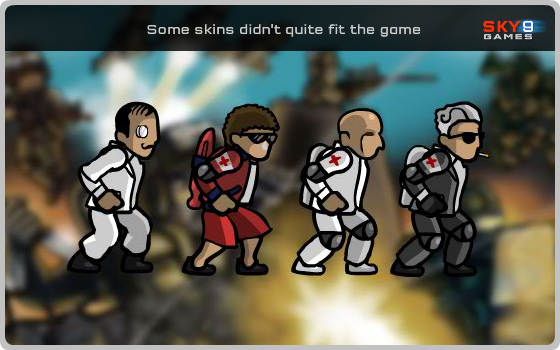 Like SFH1, the sequel would've featured female skins (barring the Juggernaut) for the player and the bots can choose as seen in the concept art below, before the game received a graphical rework to the classes we know today. Unlike the skins mentioned above, all of the skins did not survive during development, and ended up being scrapped. It was cut due to the specific cast of characters that were needed for the story. The female soldier concept would later return and be introduced in SFH Extraction nad later SFH3, albeit only for specific characters/classes rather than all characters/classes.

A sixth class would've made its appearance as well, simply known as "Spec Ops", but other than the name, appearance and weapon usage (using SMGs), there is no specific information about them. The reason why it was cut is likely the same as above. It would've been likely a stealth-based class, focusing on infiltration behind enemy lines. The Ninja class can be seen as a spiritual successor to it, as both of their roles rely on stealth in order to succeed. In the final game, there was no coding remain for the class itself.

One noticeable weapon that was excluded from the game is the KRISS Vector, more specifically, the long-barreled CRB version (judging by the concept art below). It would've been to be the same one as the previous game, with slightly different statistics. The reason why it was cut, is unknown. Had the weapon be included in the game, it would be one of the few weapons that appeared throughout the entire series. The final game only features a sprite of the weapon and its magazine, but no coding for it can be found.

Several camos can be seen in one of the pre-release customization screenshot, whoever they're cut from the game, and scrapped entirely, with them being replaced by new ones.

In addition to this, "Outbreak", a gamemode for quickmatch was also cut from the game. It is similar to the above cut gamemode revolving around zombies. Like the Vector above, it is unknown why the gamemode was still cut.

SFH3 also featured unused head skins like in SFH1 of which two of them are characters from Metal Gear Solid 4, Meryl and a Haven Trooper.

The game also has an unused voice toggle like in the previous games, this is supported by the fact that when the developers in the challenge level "Devs De La Muerte" "say" something when they gain a new perk, the in-game music volume level was lowered. The voice toggle setting can be seen if one were to expand the game's window to see outside of the game's intended resolution. It was most likely cut due to the fact that aside from the in-game developers and the cutscenes, there was no dialogue nor voice acting involved.

Like the previous aforementioned games, Outbreak still remains in the code, but unused. 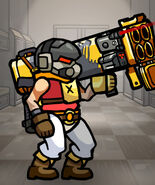 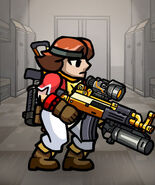 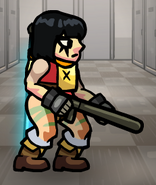 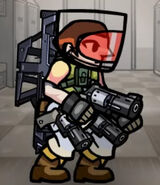